Feilding youngster fired up for Manfeild

WATCHING action at Manfeild and having a dad and older brother compete on two wheels fired the racing ambition of a Feilding teen set to show his talent on his home track this weekend.

What also got this aspirant into the Suzuki GIXXER Cup, an exciting new start-up series designed to get young bloods back into motorcycle road and track racing, can also be measured in material necessary for starting a good blaze.

The name of the title sponsor on the fuel tank of Justin Maunder’s motorcycle tells a story of fantastic home-built entrepreneurship.

‘Justin’s Killer Kindling’ an enterprise run by the Feilding Agricultural High School student out of his mum’s garage, has put him on the right track for a category Whanganui-domiciled Suzuki New Zealand has created to provide potential future champions with a springboard.

Effort rendering pallets down into firebox-sized clean kindling that he packs into banana boxes and sells to a widespread regional customer base raised the money to realise this racing dream and become the youngest – and one of three 14-year-olds – in the 20-strong field.

The ready-to-race package of the GSX150F bike, full Alpinestars race gear and Bell helmet accounted for earnings from selling 600 boxes of firewood, “every cent well spent” the youngster says.

His dad Shane, a motorcycle technician at Palmerston North’s Suzuki franchise Courtesy Motorcycles, says while he and Justin were probably equally eager to get into the series, it was important for the youngster to know this was not in any way a free ride.

Justin says he appreciates that there is a serious commitment to this fun.

“It’s a great opportunity for me and I want to make the most of it. I want to go further in motorcycle racing … maybe, one day, even to MotoGP, though that’s obviously a long way away at the moment.”

GIXXER seems set to be a good grounding. With the fledgling racers on matching bikes, the racing is certain to be intense, a level playing field being considered an ideal environment for the stars of tomorrow to learn their craft and spread their wings.

With his previous riding experience having been limited to farm bikes, Justin has prudently made the most of various track days and training sessions so that he could achieve decent bike time and experience before the flag drops.

Several top Kiwi riders from the past and present have generously offered their advice and coaching to the GIXXER Cup riders.

Justin was especially pleased to have attended a full day of tutelage two weeks ago from multiple national champion Brian Bernard.

“The day at Manfeild with him was just amazing. I did something like 220 kilometres, which is way more than I would have had in a normal test day, and he was just brilliant.

“He taught me a lot about cornering lines, braking points and so on. The highlight was when he got us to ride complete laps without using the brake – it seemed a bit scary but in fact it was incredible, and I clocked up some really good laps, some faster than my previous best lap time there.”

A few scrape marks on his bike and scuffed leathers remind that his learning curve has not been entirely smooth; he’s also now onto his second helmet after a fall – though that one was not his error; he dropped the bike to avoid another rider’s crash.

The series will introduce him to most NZ circuits, starting with Taupo last weekend, but he’s naturally especially keen to race Manfeild, with lots of support from family and friends.

He’s not thinking too much about podium spots yet; the main aim is to finish.

“We are still learning, not only about riding but also how to set up the bike, and some of the other riders are older and have racing experience.

“But being 14, I guess I have opportunity to stay in this for a while whereas some of the others will be too old soon.”

Entries have been received from as far afield as Greymouth, Timaru and Auckland.

The category runs in support of the Suzuki Series that, after Manfeild, has its traditional Boxing Day finale on Whanganui's streets. GIXXER skips that world-famous challenge so will next be seen in the four-round 2018 New Zealand Superbike Championships.

Wellington's Victoria Motorcycle Club is evaluating fitting the GIXXERS into its Manfeild-based winter series, to provide further opportunity for these riders to keep their competitive spirits alive during what is usually the “off season” for New Zealand road racing.

Manfeild chief executive Julie Keane says she is delighted a local young talent is realising his dreams in an exciting new category.

“This weekend’s meeting is the biggest, most prestigious international motorcycle racing event we stage annually.

“We are delighted to have riders from throughout New Zealand and also overseas, from seasoned professionals to those who are enjoying their first taste of this great sport.” 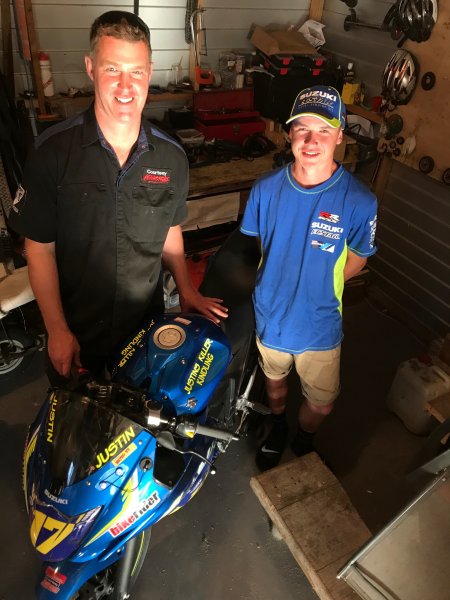 Caption: Justin Maunder, with his dad, Shane (right), carries Feilding’s hopes in the new GIXXER motorcycle racing class, coming to Manfeild as part of the Suzuki Tri-Series on December 16-17.