Hartley pointing the way at Manfeild

ANOTHER regional motorsport hero has been permanently honoured by the Manawatu facility where his circuit racing career began.

Manfeild this morning hosted a celebration of Brendon Hartley, the Palmerston North-born and raised racer whose trophy-rich international motorsport ascendancy was especially stellar this year, culminating with entry into the category he dreamed of entering since age six, Formula One.

Now his amazing year ends with a home ground honour - the naming, as Brendon Hartley Drive, of the main thoroughfare into a venue he has also known since childhood.

Fittingly, the route that comes off South St, Feilding, leads to Manfeild’s most celebrated asset, this being Manfeild Circuit Chris Amon - named after another Kiwi F1 legend of an earlier period who became Hartley’s friend and was a huge fan.

In expressing appreciation about the local recognition, Hartley recalled that he first raced the home of the New Zealand Grand Prix at age 12.

That debut was in a Formula First (then known as Formula Vee), run by category identity Dennis Martin, also of Palmerston North, whose Sabre team has provided the starting point for a number of drivers who have gone to international success.

The wee single-seater had a fraction of the power of the Porsche 919 Hybrid LMP1 which within the last three years has taken Hartley to two world titles and a Le Mans 24 Hours victory and the Scuderia Toro Rosso Honda he will drive in 2018, starting with the Melbourne F1 GP in March.

Said Hartley today: “I’m very honoured and it’s very emotional to see my name there … my earliest childhood memories are here at Manfeild, watching my dad race and I had my very first race here.

“The association with Chris Amon is also special; he was a hero and I knew him very well … to even be mentioned in the same breath as Chris Amon is very special.

“I left home at 16 so I’ve spent more than a third of my life away, but my feet are still on the ground and Manawatu will always be home. I’m very proud of that. I’ve learned so much over the last few years but it all started here.

“I’d like to think the journey is only just starting, I have made it to my dream of Formula One but my goals are big … I have big ambitions, big dreams.

“We are lucky in New Zealand to have so many talented athletes, so many talented drivers and I know a lot of people say that you make your own luck, but I have been extremely lucky to have had support from my family and so many others New Zealanders.”

The road naming was driven by the Manawatu Car Club, of which the 28-year-old is a member, and was readily sanctioned by Manfeild Park Trust, which now operates the world-famous, club-created circuit.

Says club president Richie Arber: “This is the best way to recognise a young man who has achieved some incredible results and is now elevated to a category he dreamed of since he was a kid.

“Brendon is not just a world champion; he is also our champion. A people’s champion, just as Chris Amon was.

“This is also a recognition for the Hartley family – Bryan, Linda and Brendon’s older brother, Nelson, are very much part of the Manfeild and car club story, through competition and contribution.”

Nelson also contested the Toyota Racing Series in which Brendon subsequently won enough acclaim to attract the attention of the Red Bull junior scholarship, the springboard to his overseas’ career when he was just 16. Brendon said his period in TRS was made all the easier from Nelson having also raced in it: “I had the knowledge gained from my older brother.”

Bryan also reached the highest level of national single seater competition and all three have raced in the New Zealand Grand Prix.

Linda was three-time club ladies’ champion and her familial link is extra-strong, her parents being the original Manfeild gatekeepers.

The Hartley motorsport story is incredible and Brendon’s achievements are the talk of international motor-racing, Arber said.

“He is a great inspiration to all. He has lifted the New Zealand public’s interest in motorsport and put the national media into a frenzy. And his achievements are based on his talent – this is not a silver spoon story; the Hartley family are hard-working, run-of-the-mill Kiwis.”

Christmas is the family’s traditional get-together, one becoming ever-precious due to Hartley’s professional schedule. That’s not the sole reason for the recognition occurring on December 28 – this is also a special number for the clan. Bryan raced with 28 and his sons have sought to have it on their competition cars whenever possible.

“We recognise Brendon not simply for his amazing victories and those fantastic world championships but also for his sheer determination to succeed against, at times, some huge odds.

“Brendon is now entering a new phase of an exciting career and we have every confidence more success is coming his way.

“New Zealand motorsport is a great breeding ground for world-class talent –there are future Chris Amons and Brendon Hartleys out there and they are very likely developing their skills on our track.” 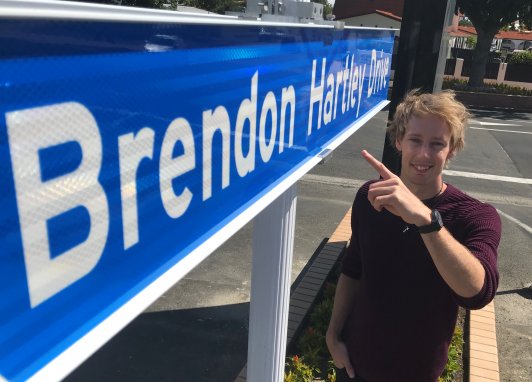