RETURN of superbike racing to Manfeild next March raises potential for a long-standing lap records being bettered.

“The advances in tyre and motorbike technology since a national championship event was last held at Manfeild could raise that possibility,” suggests Glen Williams, Motorcycling New Zealand’s President and a firm fan of the Feilding track.

A resurgence of road racing and emergence of fresh rider talent over the past season also fuel this prospect, he adds.

Any challenge to the optimal motorcycle time will be keenly followed. The overall motorbike record of one minute and 5.343 seconds was set by Andrew Stroud on a production superbike on February 24, 2008.

In those days Williams was also competing, but now he has retired from the grid and sits as President of Motorcycling NZ and  also represents the Oceania region for the world motorcycling governing body, the FIM.

However, it’s the local scene that keeps him grounded and he says the decision by Motorcycling New Zealand and the NZ Superbike (NZSBK) championship to return this series to Manfeild on March 29-31 for the penultimate round of the 2019 championship is great to see.

“Although superbikes have taken a break for recent seasons, Manfeild has a proud tradition of holding an NZSBK round and it will be great to see the championship return to the Manawatu circuit.

“All the riders I’ve spoken to, particularly in the lower North Island, are really pleased to see a round happening at Manfeild again.”

Manfeild is especially exciting for motorcycle racing as it produces a mix of challenges unlike anywhere else. The long straights, tight corners make for big speed, hard braking and lots of potential for overtaking.

And, of course, it’s one of the few places around the world where spectators can basically see the entire race circuit from the grandstands.

Williams’ enthusiasm is shared by a closely-aligned commentator.

“It's in a great location, being in the central part of the lower North Island, serviced by plenty of good motels and restaurants, and has always been popular with the motorcycle community because of its safety features,” he said.

“Nobody likes to crash … but accidents are a part of racing sometimes.

“This is partly what makes Manfeild a special place for spectator enjoyment and for bike racing. There is plenty of run-off should riders get into trouble ... no solid concrete walls to smash into.”

This factored into Manfeild being granted hosting rights to the inaugural World Superbikes (WSBK) Championships final round in 1988 and again in 1989, 1990 and 1992.

The circuit’s status also reflects on why it has regularly hosted so much national and regional bike racing, including the annual Suzuki Tri-Series.

Manfeild chief executive Julie Keane is delighted her facility will feature in a title fight that returns to five rounds and delivers a strong spread of support classes.

“We believe we can offer this championship its best weekend. It’s going to be great for competitors and unmissable for fans.”

The 2019 national championship starts on January 5-6 at Mike Pero Motorsport Park, at Ruapuna near Christchurch, and continues at Levels International Raceway, Timaru, on January 12-13. The North Island elements kick off on March 2-3 at Hampton Downs Motorsport Park in the North Waikato, with Manfeild coming next. The finale is at Bruce McLaren Motorsport Park, Taupo, on April 6-7. 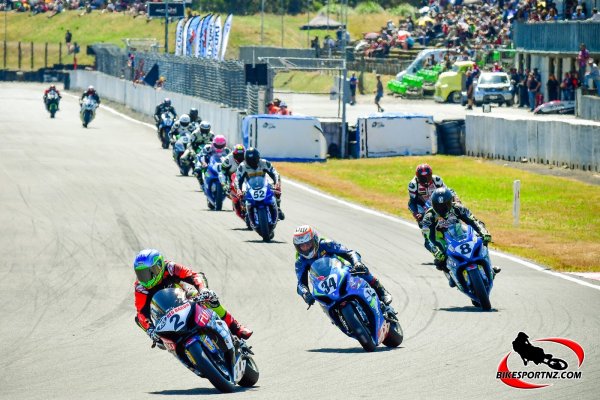 Caption: The national superbikes’ championship’s return to Manfeild in 2019 has excited the sport.