MANFEILD’S fast and challenging layout will add extra spice to this Saturday’s (July 21) finale of an endurance car race series.

With points still so close that more than half the entrants stand a mathematical chance of victory, the free-to-view third and final leg of the most competitive ENEOS North Island Endurance Series season to date will likely be an extreme paced epic.

Any one of the top 16 teams in the title chase, including Palmerston North outfit MIKE Racing, is in with a mathematical shot of winning the drawcard three-hour series, an organiser contends.

“The championship is up for grabs,” says Chris Watson, principal of HRC Events, architect of a series in which 250kmh-plus capable cars from the world’s greatest performance stables – McLaren, AMG-Mercedes, BMW, Ferrari and Porsche included - mix it with a huge variety of more familiar everyday brands, Holden, Subaru, Ford, Honda, Toyota and so on.

Watson says the action he expects to play out on Manfeild: Circuit Chris Amon will remind why GT Racing is popular all round the world.

“It brings all the exotic manufacturers to the track. The cars are quicker than the Australian Super Cars, much faster than the NZV8s.

“The racing is interesting. The cars all have different performance characteristics which means there is lots of passing.”

Thought about Manfeild being an “interesting track” is a dry-humoured understatement from a man who has raced there on and off since it opened in 1973 and knows full well what outcomes can occur in the heat of battle.

His biggest moment was when racing a Triumph TR5 two-seater open sports car which he multi-rolled in such spectacular fashion that a photographer who caught the entire sequence was nominated for a ‘best shot’ media award.

Saturday’s racing will also be inevitably intense and no-one can take it easy; even the mandatory pit stop is bound to be frenetic. If the teams can get away with a single refuel, that is – expectation is that some of the faster FIA GT3 homologated machinery will have to pit more than once.

Manfeild chief executive Julie Keane says the opportunity for race fans to watch, at no cost, a field whose total value would run into the millions of dollars should not be bypassed.

“GT racing is a global success story and we are delighted that this finale has such potential to deliver all the edge-of-the-seat action that captivates audiences all around the world.

“We have to admit to being a little bit excited that a Palmerston North-based team could carry off the silverware.”

That comment reflects that while the GT-B class pace-setting and round one winning Simon Gilbertson-John McIntyre Racing team is arriving with a championship lead, it holds a mere five-point advantage over GT–A pairing Brendon Leitch and Christina Orr-West of Palmerston North-based ITM MIKE Racing.

There’s strong belief the Feilding layout’s fast and flowing nature will be particularly beneficial to the high downforce GT3 machinery.

Five class titles will be decided at the meeting, which starts with an 11am-12pm race with the three-hour run starting at 1pm.

Caption: The ENEOS North Island Endurance Series is set for an exciting conclusion at Manfeild on Saturday, July 21. 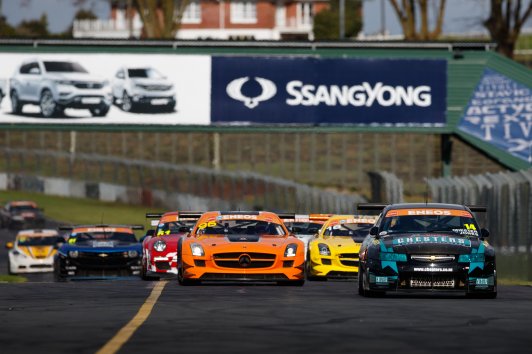