WHAT to buy a 100-year-old becomes a question of ever-increasing relevance with each passing year of a Manfeild-based event for vintage vehicle enthusiasts.

The Manawatu branch of the Vintage Car Club’s annual swap meeting, at Manfeild Stadium tomorrow (October 5), is a nationally-renowned mecca with proven record for being one of the best opportunities to lay hands on rare spares.

In respect to that aspect, it is potentially set to enter a gold era from now on, with an increasing count of club members’ vehicles set to hit their 100th year since manufacture.

That reflects a big change in the car business that occurred from 1919.

The increasing volume and variety of cars then subsequently richly provisioned a survivor pool that feeds today’s vintage car club movement, so while parts are not necessarily prolific now, the mathematical probability of locating them is considerably enhanced.

Should Vintage Car Club Manawatu club spokesman Trevor Hardy have need for parts for his 1924 Chrysler Brougham, one of the world’s first cars to have four-wheel hydraulic brakes, he knows the swap meet is a good place to start.

He notes that over the past few years there’s been a whole new level of interest from sellers and buyers who come from all points in the hope of locating that special something.

Appreciation of vintage vehicles in New Zealand also seems to have revitalised in recent years. We love to see the old stuff on the road and some will be displayed at Manfeild.

Shifting from an outdoors venue to Manfeild stadium a decade ago has definitely been a big lift for the swap meet.

As a car enthusiast, Manfeild Park Trust acting chief executive Gordon Smith needs no convincing about why the club’s major fundraiser for the year remains so popular.

"It’s one of those evergreen events and quite a fascinating day out. From small parts to entire vehicles – you never know what’s going to be unearthed.”

Entry costs $20 for sellers and $10 for buyers and accompanied children are free.

Image: Trevor Hardy in his 1924 Chrysler Brougham, one of the world’s first cars to have four-wheel hydraulic brakes. 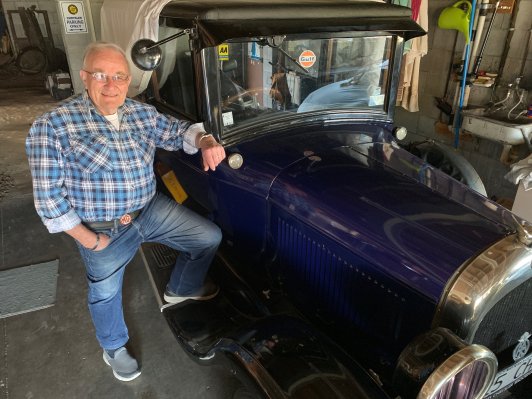