THE thrill of driving the most powerful single seater racing cars in New Zealand tempered with recognition that the machines – and often their drivers – are irreplaceable legends of speed.

Manawatu driver Kevin Ingram’s competitive spirit has been re-energised by joining this homage to an open wheel, single seater auto-racing formula that ran in different series in various regions around the globe from 1968 to 1982.

These veterans still set the pace in today’s world yet, with such special ingredients, it’s racing with enough respect to mitigate risk.

“There are some very rare cars out there; some might be the last of their type in the world and, on top of that, some are spending a lot of money on their cars. None of us want to be driving into each other.”

This Feilding identity is well versed in motor racing, having been involved at national level in the 1970s and 1980s, peaking with being crowned the 1983 Formula Ford champion.

Yet returning to the sport last year, with one of the icons of its age, a Lola T332, has very much represented as a fresh start.

Drawn by memory of the impact the raw, V8-powered slicks-and-wings single seater racing cars had on him in period, he has discovered these old models have lost none of their bite.

“I’ve never driven anything so fast before and I haven’t driven competitively for 25 years. I’ve learned this car is easy to drive, just not always easy to drive flat out!”

The Sound MG Classic at Manfeild on November 15-17 is especially alluring. A season-opener for this year’s championship is naturally also the drawcard event at this massive classic car meeting as the F5000s only involve in every second year.

Beyond that? Well, there’s the small matter of this being the first time he will race the car on his home circuit.

“When I got the car last September we tested at Manfeild but I’ve never raced it on there.”

Not that he’s at all unfamiliar. A layout on which he has laid down innumerable laps is one he looks at daily, as his home affords an excellent view of the facility.

Manfeild’s banked corners, unique in the southern hemisphere are a huge thrill but also might alleviate the two challenges he is finding with the car. These being?

“You arrive at corners very quickly, so stopping it is one. The other is with accelerating out. I’m still cautious because I’m still coming to terms with how much power I can exactly use (before it loses traction). I just need to be a bit braver.”

Preparation is thorough, the car being completely dismantled to sort any issues and also address a factor highlighted by comparing with an identical car raced by the category’s own ‘living legend’ and perennial pace-setter, Ken Smith.

“I think my car is about 100kg over weight so we’re just looking at what we can do to lose some of that. It’s quite tricky because it’s a matter of a lot of small refinements adding up to a bigger difference.”

Manfeild’s association with the class is well-cemented. The very first international at this venue, back in 1974, was a F5000 event. The link with the MG Classic is almost as enduring – this year’s is the 34th at the venue.

Practice and qualifying takes place on Friday, November 15, with races held from 9am to 4.30pm on the Saturday and Sunday. General admission is $25 with children under 14 free when accompanied by an adult.

Photo: Kevin Ingram of Feilding is looking forward to racing his Lola T332 in the Formula 5000 series opener at Manfeild Circuit Chris Amon on November 15-17. 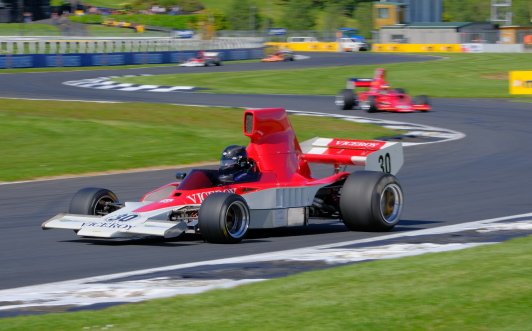