“We produce the world’s best – and that’s a reputation we want to keep.”

New Zealand deer velvet quality control begins with events such as one coming to Manfeild, explains a local industry involver.

Craig Hocken, who farms deer near Colyton, is an organiser of the November 28-30 North Island Velvet Competition, expected to draw more than 70 entries to Manfeild Park for judging and display of velvet and hard antlers.

Manfeild Park chief executive Kathy Gibson sees this as exciting hosting opportunity for the venue. Velvet production involves the majority of New Zealand’s 1500 deer farms and in being valued at about $105 million, presents opportunity for better returns than venison.

“We look forward to welcoming this significant event and having opportunity to showcase our facility to attendees from all over the North Island.”

The product derives from stags’ antlers during their phase of rapid growth. The name “velvet” references the soft covering of hair.

The 2019/20 season, which has just started, is expected to produce more than 850 tonnes, against 800 tonnes exported overseas last year, and about 700 tonnes the year prior.

Most goes to Asian communities who believe it has healing properties, particularly for immune function (to ward off illness) and anti-fatigue.

Health food companies selling high value branded products in South Korea – a market that didn't exist 10 years ago – are especially keen on NZ product, because of its world-beating quality.

Velvet’s increasing use in healthy food products, here as well as overseas, is attracting a new wave of consumers and he has personal experience of the benefits, saying taking a couple of pills a day has been great. “It’s very good for arthritis in the hands.”

However, only a fraction of national production remains at home, so large is the export trade. The value of this having doubled from $30 million in 2014 to $70m in 2018 has returned a lot of confidence into an industry that has known lean times, too, but farmers careful not to allow too much growth too quickly, lest it impinges on quality.

That’s why the competitions are crucial, Mr Hocken says. The North Island events are cycled through different zones and with this year being the Central Region’s turn, Manfeild Park’s stadium was an easy choice – the venue is central, spacious, has ample parking and good quality accommodation is close by.

The velvet judging – which doesn’t involve actual animals (mainly red deer), just the velvet and hard antlers - and business sessions are for industry involvers only, but the public has opportunity to see what it’s about with an open session on the final day.

The show times during the harvest, which typically runs from October through to February.

Antlers begin to grow in the spring from two bony protuberances on a stag’s head. They grow quickly, up to two centimetres a day.

The antlers are surgically removed when there is a maximum soft tissue and minimal calcification of the bony core, using anaesthetic. If they were left on they turn to hard antler and would naturally fall off in a few months, to grow again the following spring.

There is also an industry in antlers that have reached full growth and hardened; these sell as trophies.

These are easily displayed, unlike the product in its velvet stage which, being tissue, requires being kept in frozen state else spoilage occurs. Those antlers are also graded primarily according to circumference and also by ‘style’, meaning uniformity of shape.

“They can only be kept out of the freeze for 45 minutes at most, in order to ensure the core temperature remains intact, so as you can imagine judging is quite an art.”

Mr Hocken says it’s a good life for the animals and, when harvest occurs, everything is done to highest hygiene and ethical standard by approved practitioners following rigorous protocols set out by the Animal Welfare Act.

Image: Craig Hocken and examples of antlers in the velvet stage. 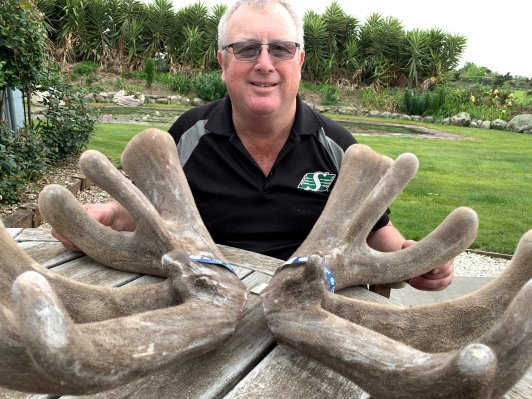