Manfeild delighted Smith back for 2020

The 78-year-old icon’s long-standing desire is to achieve a personal goal of 50 starts in the nation’s biggest domestic circuit event.

His return to the Castrol Toyota Racing Series for the class’s big finale at Manfeild on February 15-16, will take that count to 49.

That this quest has been largely fulfilling on Manfeild Circuit Chris Amon during the TRS era is highly appropriate, venue chief executive Kathy Gibson says.

“Ken Smith’s association with what he has called his favourite place to race spans the entire history of our facility.

“It’s remarkable to think that, when we opened in 1974, it was 10 years after he first contested the NZGP and he was already a big star of the racing scene.

“We are unabashed admirers of everything he has achieved and would hope fans will be at Manfeild to join us in celebration of yet another incredible milestone in racing life.”

His amazing career is subject of a documentary film ‘Kenny Smith: 60 years at the wheel’ that, appropriately, is achieving its regional premiere at a Palmerston North theatre on the Thursday (February 13) before the 2020 GP.

Smith’s talent took him overseas, and though he did not gain the same opportunities as contemporaries including Chris Amon, Bruce McLaren and Denny Hulme, he did enjoy success racing in South East Asia.

His best achievements have been achieved in NZ – a massive count of racing victories, capped by three NZGP wins, in a career that has also secured five coveted NZ Gold Star Driver’s Awards. In 1987 he was awarded an MBE for services within motorsport.

He lifted the silverware again in 1990 during the Formula Pacific era, this time in a Swift DB4, and then most recently, in 2004 at the plucky age of 62, in a Van Dieman Stealth during the brief period it became a Formula Ford contest.

To give an even more complete picture of the span of his career, that very first GP he entered saw him racing a 1500cc Lotus 22.

A three-peat is special in its own right. Stirling Moss, the late Jack Brabham, Craig Baird and Nick Cassidy are the only other three-time winners.

Of course, what makes Smith even more of a stand-out is his GP start record – no-one has come remotely close to that and, in all likelihood, his half century will never be challenged.

His first attempt in Toyota Racing Series came in 2013 and he has raced in that category in either full campaigns or, as has happened in recent years, as one-offs.

Smith acknowledges his ongoing involvement has increasingly become a privilege, particularly in the TRS era as all the cars are provisioned by Toyota New Zealand.

However, the intensity of his racing spirit makes that all the easier for all involved; he recognises that an event of such high international status demands a highly concentrated competitive approach. He aims to deliver.

“I think it’s also this part of his character that makes him so respected and admired by fans and fellow drivers,” Mrs Gibson says.

“He recognises that it is a privilege to take part in the Grand Prix and to be as competitive as he can by driving as hard as he can in a field packed with great young drivers all chasing bigger dreams.”

For the 2020 race those protagonists include defending NZGP winner and TRS category champion Liam Lawson, a protégé of Smith’s who the old hand recognises as being “a truly exceptional driver.”

Caption overview: Ken Smith’s incredible racing career will be enhanced yet again when he competes in the 2020 New Zealand Grand Prix on Manfeild Circuit Chris Amon on February 15-16. Ken Smith is still a huge draw for motorsport fans in awe of his enduring ability to compete at the top. 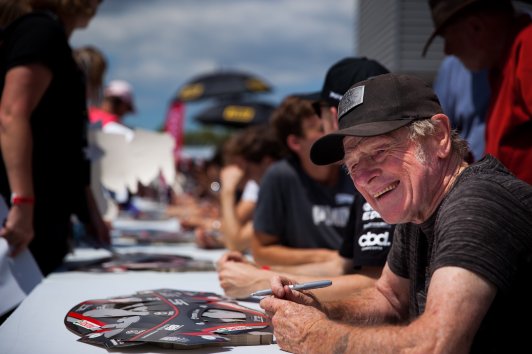