WHEN does a diehard enthusiast become an outright obsessive?

It’s likely a fine line differentiating one from the other when it comes to collecting and curating vintage farm machinery, two involvers have to smilingly agree.

Though their individual tastes differ – Capstick, who grew up on a farm but ran a townie business for all his working life, favours tractors and implements from the 1930s while retired farmer Dench has a particular taste for the International Harvester brand – they are united about the importance of preserving our agricultural heritage. 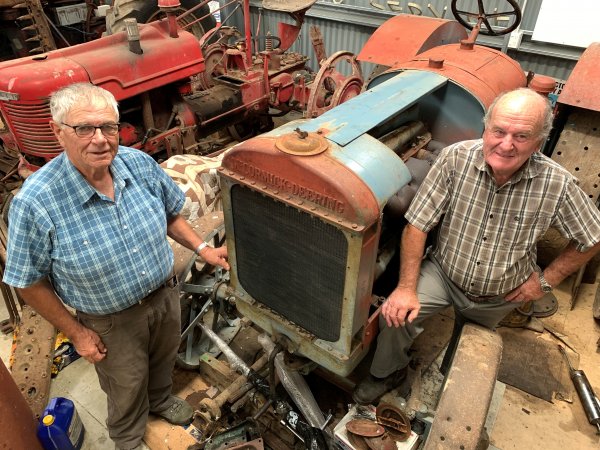 Caption: Ian Capstick (left) and David Dench with a rare 1924 McCormick-Deering 15-30, one of a number of tractors in the Dench collection.

Enforcing how agriculture still serves our food supply, educating in the former ways of farming and farm life and demonstrating how this old equipment worked and, in many instances, is still useful are remits of their passion.

Keeping this history alive also reminds how Kiwi farmers have often shopped the entire globe for the right gear at the best price.

Insofar as powered machinery went, American product was the go in the 1920s and ‘30s, but things changed after World War II.

“The bulk of the tractors pre-war would have been American, with a small number from England and Europe,” Mr Capstick says. “While quite a lot of implements came from a far more diverse area.”

After 1945, a Commonwealth assistance scheme compelled us to turn to Mother England and British brands become prominent, Mr Dench adds.

The preservation of this rich agricultural heritage through education and interaction is the catalyst for a massive display coming soon to Feilding’s Manfeild events arena.

The Manawatu Vintage Ag Expo on February 29-March 1 will be an irresistible draw for anyone with interest in machines and tools from past rural life, some restored to as-new condition, others maintaining the patina of age.

Hundreds of mainly working order drawn from as far afield as Whangarei to Timaru, ranging in age from the 1970s back to the late 1800s, spanning in size from compact chuffing stationary engines used to drive shearing plants, milking machines to large vehicles.

There are tractors galore of course, including numerous rarities, such as Mr Dench’s 1924 McCormick-Deering 15-30 (the numerical meaning 15 horsepower on the drawbar, 30 on the pulley).

Used to run a threshing mill, with the throttle stuck (still) fully open, it’ll be part of the weekend’s feature display, The Roaring Twenties, promising seldom-seen vehicle, apparatus and memorabilia, including household items and historic images.

The Steam Traction Society is supporting with four huge traction engines and a steam roller, a working area has been set out for demonstration of around 40 earthmovers – from tiny Cat 10s of the 1920s through to the mighty D8s crucial to the major projects – from highway building to dam works - that transformed NZ during the 20th century.

Also on the card are shearing demonstrations in an authentic vintage shed.

International Trucks, a familiar sight for so many years, are here in force with their owner group, known as the ‘Binders’ (a wry historic reference), delivering up to 50 examples of models ranging in age from 40 to 100 years.

“I think it’s the only truck still made in New Zealand but originally they came from America and, from 1950, were out of Australia,” Mr Dench says.

There’s plenty of family fun, with a fairground organ providing background music to a host of jolly entertainments. And, of course, there’s a food court and stalls selling a crafts, scale models, memorabilia and so on.

The organisers have set an entry fee of $10 per adult, with children under 16 coming in for free.