TWENTY-five years ago Sue Richardson sought professional assistance when a pup she bought refused to come back when called – today she, her husband and their 10 border collies are award-winning obedience stars.

‘X’ factors that make all the difference in the competition ring include watchfulness, willingness to please and a happy attitude – not just from the four-legged entrants but also their handlers.

“Dogs are just like us, they have good days and their bad days,” says Ms Richardson, a local organiser of the Blackhawk National Dog Obedience Assembly bringing 230 people and 800 canines to the Feilding facility on October 20-23 for precision heelwork, running, weaving, scenting, obedience and dog dancing.

When dogs are in the zone, they’re simply incredible; such masters of body language, they’ll predict what will next be asked of them, Ms Richardson says. And speaking of speaking; in the most challenging competitions, there’s no chat.

“You cannot give encouragement … or hand signals. It’s all just down the basic commands of ‘sit’, ‘heel’ ‘come’ and so on. They absolutely have to know what they are doing.”

The dogs can do it. If something goes wrong it’s more often the handler who is in the dog box “… because they haven’t taught something properly.”

Sue knows about that. The kelpie cross bought at a stockyard quarter of a century ago was such a maverick she sought help from a local dog training club. It was a life-changing moment.

That particular pup didn’t go on to be the sport’s top dog, but others have.

The sport’s biggest prize is obedience grand champion, a true trial by fire with 20 challenges. Success requires 10 first places and scores of no worse than 290 points from a possible 300 in the remainder. Sue has four titles, husband Kenn Windley three.

The glittering prizes are eagerly sought, not least when the three regions - event host Central, representing the bottom part of the North Island, is in gold and black – facing off their five best pairings.

Elite events don’t over-ride a focus on fun and participation. Sue speaks with quiet pride about the perfection of seeing “50 dogs sitting all in a line, all doing a stay, for five minutes, with their people out of sight.”

An event Manfeild last played host to in 2014 is this time generously sponsored by Black Hawk Dog Food (and supported by Pub Charity) and public attendees have opportunity to win that product.

Jordyn Tate, Manfeild Events Manager (and border collie owner) says she is looking forward to seeing the venue given over the country’s top wonder dogs.

“Manfeild will be a hive of activity that weekend with the dogs holding attention at the stadium and a major motor-racing event, the Manawatu Car Club’s OctoberFAST event, on Manfeild: Circuit Chris Amon.”

Manfeild Park’s size and flexibility offers pluses for both events. With the canine competition, the indoor aspect is tasty – though the outdoor areas are also fine; this is a sport that shrugs off the rain. Other attractions are the stadium suites, which will host evening functions, and on-site camping.

The event could well be inspirational to all dog owners. Ms Richardson says dogs love learning and, while she usually starts her own puppies at just six weeks, they are never too old – the top pooch in her pack being a great example. At 10, Scottie is a retiree in human terms who remains championship material.

Training, she says, is all about being calm and patient, learning to think as a dog does and knowing when they’ve had enough.

The Blackhawk National Dog Obedience Assembly is open to the public (but please leave non-competing dogs at home). More information, including the event schedule, at www.manfeild.co.nz 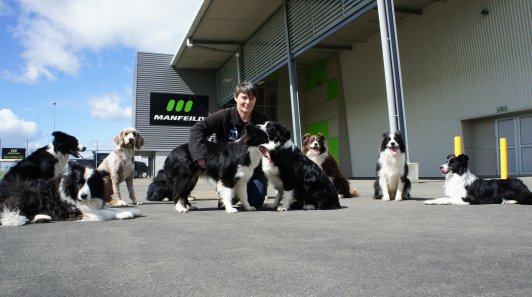