Jarred Townsend, who is diagnosed with leukaemia and has been told he has weeks to live, is ticking off his bucket list – and one burning desire was to test the mettle of his just-completed high horsepower Nissan Skyline.

That wish was granted on Saturday, August 5, with a full day of drifting at a venue which hosts some of the biggest national events for the now FIA-recognised skid-up sport.

Manfeild and the Manawatu Car Club, which was hosting a motorsport event on the main circuit for the weekend, worked together to realise the 24-year-old’s ambition.

The Wellingtonian said afterward he had used every bit of his flagging energy on an occasion that destroyed several sets of tyres and also understandably left him feeling drained – yet hugely elated.

“Yeah, I definitely gave it pretty much everything, there’s just a little bit left,” he smiled after his outings on the circuit’s back track.

Sheer willpower, the enthusiasm of family and friends who came out to watch and acknowledgement that he’d been allowed a very special opportunity kept him going.

“This has just been an amazing experience for me and I’m so grateful to Manfeild and everyone else for making it happen.”

The Skyline has been two years in the making but became the top priority for completion in June as the prognosis worsened for a condition that Jarred has battled for two years with chemotherapy and a stem cell transplant.

“About a year and a half to two years ago I was diagnosed with acute myeloid leukaemia … two months ago I was told it has progressed further and there are no other treatment options.

“So, I’ve been trying to tick off my bucket list.”

That’s meant everything from trying skydiving to a romantic night with his partner, Christie McAlister, at a secluded part of Fiordland.

But motorsports are his and Christie’s primary passion; earlier this year he put in 40 flying laps in a stock car – a brilliant effort for a first taste, his father Barrie Townsend said.

On hand to provide expert advice and ride shotgun as the driver became acquainted the track layout, the drift ace soon became a delighted and impressed onlooker.

Jarred was rapt with his project car, which represented a massive transformation of a write-off he’d found in Rotorua back in 2015.

The project had become a focus for his immediate and extended family, with everyone pitching in, particularly his step-father, George Hibbert.

“George and Jarred are the ones who have got this car here today. It’s been a massive undertaking,” an emotional Barry said.

The biggest effort, though, was Jarred’s. On Friday, August 4, he was so drained he could barely walk. Sheer willpower got him to, and around, the track.

“This is the icing on the cake,” he said before his first session.

“The past week my health has taken a bit of a fall but I’m feeling so good today and happy I can be here.” 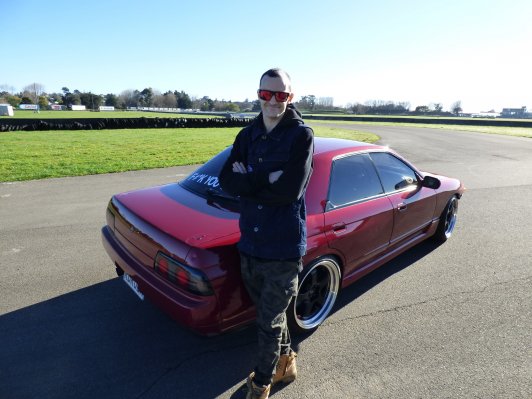