FANCY seeing yourself at the wheel of a bone fide pioneer of the roads?

Owning cars from a bygone time isn’t necessarily a rich man’s dream – at the moment many are no more expensive to buy into than a modest family shopping basket.

The boom in buying up vintage vehicles – anything built between 1919 to 1931 – that hit dizzying heights about 10 years ago has quietened down considerably attests Trevor Hardy, a co-ordinator of an upcoming vintage car swap meet at Manfeild.

Many popular vintages models and even some veterans (the pre-1919s) can be snapped up for good prices, says the Manawatu Vintage Car Club long-timer whose garage includes a 1925 Chrysler Brougham, the world’s first car to have four wheel hydraulic brakes, plus a 1970s’ MGB GT.

“The prices have calmed down. It’s a good time to buy.”

Values are not something club members get too fussed about. The vintage car club’s impetus is to keep history alive. The bright side of improved affordability is that it raises interest from new blood.

The young men who got the vintage car movement going in the late 1940s and drove the effort to recover and restore cars that their parents and grandparents had driven are also old-timers now.

Some have found it challenging keeping the old machinery in the family; one surmised reason is that the next generation finds the cars a bit too hands-on in respect to maintaining reliability.

“It’s true there is a knack to driving older cars,” Mr Hardy agrees. But even those that ask for TLC aren’t that challenging, he continues. Those very old cars were designed for a time when mechanical simplicity and robustness were required, simply because cars were very much trailblazers back then. Even highways were usually unsealed tracks. It was survival of the fittest.

That’s why the Manawatu Vintage Car Club’s swap meet at Manfeild on October 14 could well be a goldmine for locating those sometimes hard-to-source bits. The hope of laying hands on a hard-to-find gem is also why attendees come from all points.

Shifting from an outdoors venue to Manfeild stadium almost 10 years ago has definitely been a big lift for an event relatively undented by the internet because fossickers prefer to see and touch.

"The swap meet is one of those evergreen events that has national popularity. It’s quite a fascinating day out. You never know what’s going to be unearthed at this event.”

The site doesn’t open until 8am, but Mr Hardy has become used to meeting early birds when he allows in the traders earlier in the day.

The day has a reputation for being beneficial to sellers and buyers alike. “What happens frequently is that somebody has a clear-out, perhaps of a deceased estate, and they’ve found all this old stuff, but don’t know quite what to do with it.”

Caption: Trevor Hardy and his MGB GT … the vintage car movement celebrates keeping icons of New Zealand’s motoring past on the road. 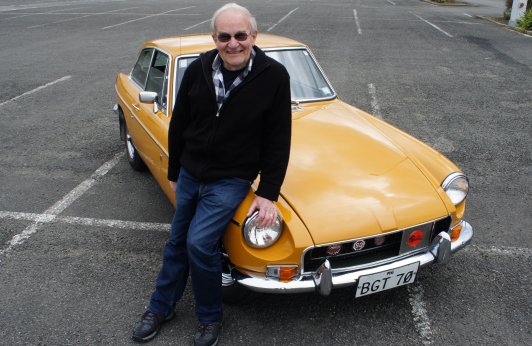